Read our article on Completion Fluids in the August issue of The American Oil & Gas Reporter.

Optimizing frac fluid chemistry can be complex, says Dave Grottenthaler, who heads Chemstream’s oil field division. “To design the most cost-effective fluid, chemical providers need to put science behind every decision,” he emphasizes. “We cannot assume the geology and water quality will remain the same from job to job.”

Before the completion crew gets to the pad, Grottenthaler recommends analyzing cuttings’ geochemistry to determine the most likely sources of scale and select an appropriate inhibitor. He also suggests conducting microbiocide efficacy studies and running friction loop tests to identify the microbiocides and friction reducers that will offer the lowest total cost for a given water quality and area.

“During the job itself, it’s often worthwhile to periodically test the water for bacteria and analytes of concern, such as barium, sulfate, calcium and iron, especially if the water source or the ratio between produced and freshwater has changed,” he says. “After the plugs have been cleaned out, testing the water again can show whether the chemistry succeeded at minimizing the risk of scale and bacteria growth.”

“Through that research, we are producing more effective microemulsions, surfactants and clay control additives,” he reports. “However, the advancement I’m most excited about is a nanodispersion FR that viscosifies the frac fluid to improve proppant transport while significantly reducing friction.”

As a dispersion, the friction reducer has a higher charge density, molecular weight and solids concentration than the emulsionbased FRs traditionally used, allowing it to activate more quickly and effectively, Grottenthaler says. “The extra lubricity means frac crews can achieve the desired pump rate–whether it is 100 or 105 barrels a minute–at much lower pressures, which minimizes formation damage. It also significantly reduces dosage rates and total chemical costs,” he says.

Because of their reduced formation damage and better proppant placement, wells completed with the nanodispersion generally produce 10-30 percent more than offsets, Grottenthaler reports. While the improvement varies widely from well to well based on the geology and frac design, he says it is significant and consistent enough that the nanodispersion quickly has become the FR for 30-40 percent of Marcellus and Utica wells.

“Many of those jobs are completed with 100 percent produced water, which emulsions struggle in because it contains calcium and dissolved or ferrous iron,” he mentions. “The calcium hardness can stop the emulsion’s inverting surfactant from uncoiling and building the polymer chain needed to provide lubricity, while the ferrous iron cuts the chain like a Ginsu knife.”

The nanodispersions are more resilient, Grottenthaler assures, in part because of how quickly they spread through the water and activate. “The chemistries are formulated to hydrate rapidly. In fact, they achieve maximum lubricity and begin building viscosity within three or four seconds,” he says.

Chemstream is looking for partners to take the FR into other regions, including the Mid-Continent and the Rocky Mountains, Grottenthaler mentions. “We are tweaking the formularies and experimenting with our manufacturing process to develop next-generation dispersions that offer even better performance,” he concludes.

Story condensed from the print edition of the American Oil & Gas Reporter. 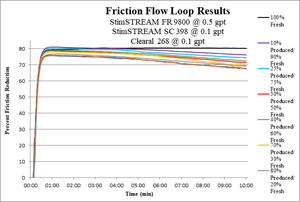 Flow loop tests and field trials show that a new friction reducer
from Chemstream retains its effectiveness in low-quality water,
including 100 percent produced water. The company says the
FR works in small dosages, allowing it to minimize the chemical
costs associated with hydraulic fracturing.